The Distinguished Service Award - Ritchie Morrow with wife, Amber and their son

Rookie of the Year - Marty Habrock 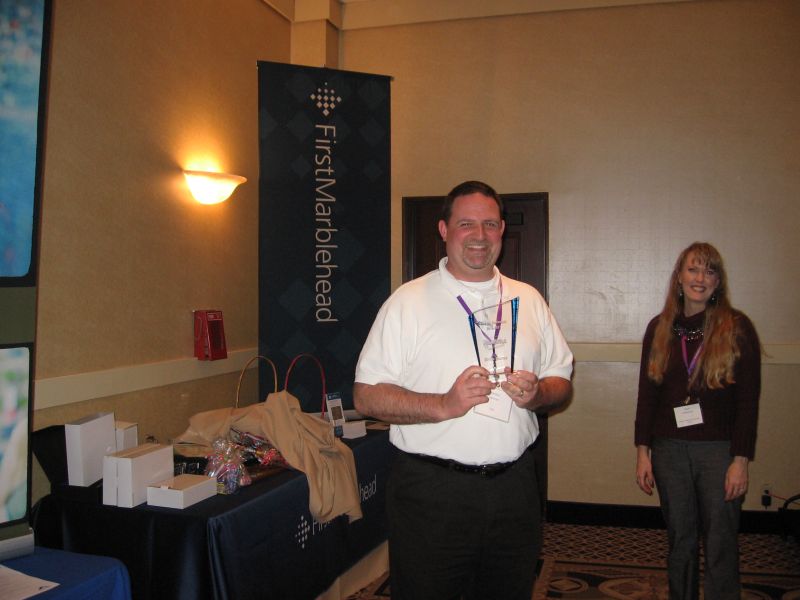 This year’s Spring Conference was held in Grand Island with the theme “Modeling our Future”. The awards banquet was held Monday night April 4th honoring many exemplary and dedicated members of our NeASFAA community.

We started off the evening doing things a little backwards. We decided to announce a few of the prestigious awards prior to dinner.

The Distinguished Service Award is given at the discretion of the NeASFAA President in honor of a person’s outstanding service to the financial aid profession and their commitment to NeASFAA’s mission.  This year President Terri Graham named two winners; Caroline Routh from UNL and Ritchie Morrow from the Nebraska’s Coordinating Commission for Postsecondary Education.  Both were surprised by special guests that were able to come and help celebrate their accomplishments, Caroline’s husband Larry and Ritchie’s wife Amber and their son.

We also gave the Bob Minturn Award a little early. This award is the highest award that NeASFAA gives to a member who is an outstanding financial aid officer. This award is given in recognition of their leadership activities within the financial aid profession. The following was said about this year’s recipient.

It has been such a pleasure to watch this person grow professionally. They truly are an exemplary model of the kind of professional we should each aspire to be as an active, practicing, financial aid administrator on a college or university campus.  This person balances their personal life, work responsibilities, community volunteerism, while earning a master’s degree. This person also held a variety of offices and committee chair responsibilities at both the state and regional levels of our professional associations.  But here’s the best part.  This person didn’t just go through the motions or serve as a place holder for all of these roles and positions.  They excelled at them.  Every time.  No exceptions. This person makes student’s lives a little easier, the world a little fairer, our profession a little better, and for those of us who’s lives they have touched, a little happier. In my opinion there is no one more deserving of this award.  This year’s prestigious Bob Minturn award went to Deana Unger, UNL

Now here is little insight about what was happening behind the scenes at the awards banquet.  Deana was not able to attend the conference; however she did drive up that evening to surprise Caroline and to congratulate her on her award. Deanna was unaware that she too was getting an award. With Deana, Caroline’s husband, and Ritchie’s family all hiding in the presidents room there was another surprise around the corner. Deana’s husband, Greg and their children also made the trip to surprise her. Just narrowly escaping close encounters we were able to pull it all off with everyone surprised! Thanks to Theresa for coordinating the surprise!!

We continued with the prestigious awards after dinner.

Committee of the year: Finance and Audit

For the past couple of years the Board has been looking at restructuring the membership fees for our organization. This committee has spent many hours researching what other state associations do. They have also put together different scenarios and the potential membership income we can obtain.  They have provided the Board useful information to make an educated decision regarding how to restructure the membership dues. This year’s Committee of the year award went to Finance & Audit Stacy Seim, Marty Habrock, Terri Graham, Kay Dinkelman, and Peggy Tvrdy.

Rookie of the year: Marty Habrock

Marty served as Vice-chair of the Finance and Audit Committee this year, which is his first major involvement with NeASFAA. This committee is generally tasked with soliciting input to develop the budget and does the annual audit of the Treasurer. This year, however, they were assigned an additional task - to research membership fees paid by other state organizations. Marty spent hours researching this information and organizing it. He also, at the request of the Board of Directors, put together several spreadsheets to estimate income after additional research to gather enrollment information for all the institutions in the state. This year’s rookie of the year went to Marty Habrock

This year we have a person who has joined everything she could get her hands on. She has only been in financial aid for a little over a year and is on 3 committees. She is on the Training Committee for NASFAA, the Summer Institute committee (vice registrar) for RMASFAA, and is the vice chair for the awards committee for NeASFAA. Now that is what you call hitting the ground running! The award for going the extra mile goes to Erin Dinneen.

Fill the Backpack in memory of Tammi Preston

This year the NeASFAA community lost one of their own. So in the memory of Tammi Preston the awards committee put together “fill the backpack”. The association was asked to bring can food items to the spring conference. We were able to collect 120 lbs of food and $165.00 that was donated to the Lincoln Food Bank in Tammi’s memory. During the banquet, Les Monroe from EducationQuest gave us insight on what a great person our association has lost. Tammi was truly a wonderful person and will be missed. Thank you everyone for your donations. Click here to view a thank you letter from the Food Bank.

We then went on to the fun awards.

I had just been told this great story. It was about some people driving to the conference.  It was dark and they were driving without their lights on. Everyone knows what happens if you are driving without your lights on in the dark right? You get pulled over!  Well the State trooper walked up to their car and asked for their paperwork. He walked back to his car and they waited, and waited, and waited. Finally when he came back he let them go with a warning. He told them to turn their lights on and make sure when they get back to Peru, that they get the correct registration in the correct car.

In order to spice things up we came up with a game for everyone to play. We had everyone stand up while we asked some questions about the different generations and the history of Financial Aid. If they could remember when it happend they had to sit down. We played this twice. The first game we were trying to get all the brand new members "Less-experienced" to remain standing. In the second game we were looking for the more seasoned financial aid veterans. This game connected our seasoned veterans with our new and upcoming future generations. We provided the winners each other’s name and contact information so they will have someone to call upon if they need to.

What a great way to bring together two different generations to reflect on the past and build on the future!

At the luncheon on Tuesday the Awards Committee gave certificates to the following NeASFAA members who have served for a designated number of years:

New Babies and Grandbabies were recognized with a Piggy Bank or a picture frame.  Welcome the following:

Thanks to everyone who nominated someone this year.  Without your nominations we couldn’t celebrate all the award winners.