I'd like to begin this column by telling you how much I'm looking forward to the year ahead! We had a very productive Board of Directors Retreat in May - great ideas were exchanged and we have awesome committees. If you have not had the opportunity to serve on a NeASFAA committee or run for a NeASFAA office, I would strongly encourage you to consider that next year. It really is a great way to get involved.

To the WORLD, you may be ONE person;
but to ONE person, YOU may be the World!

Through all of the challenges that may come our way - tuition increases, budget cuts, Reauthorization - it is sometimes difficult to remember why we're in this profession. But, I hope you never lose sight of the many, many students that benefit from your dedication and hard work. NeASFAA members truly are "making dreams a reality" for many students. Some of them don't take the time to thank you, so I will. Thank you for all that you do!

I hope you all have a great summer!
Deana

A common question throughout the student aid community seems to be, "How much does a student borrow before leaving school with a postsecondary degree?" Many studies have tried to answer this question, but due to limited data sources (e.g., a study based on a lone servicer's portfolio), a fairly representative estimate has been difficult to pinpoint.

The Department of Education (ED), via the National Postsecondary Student Aid Survey (NPSAS), has helped resolve this quandary by compiling and making available nationally representative data every four years. NPSAS' most recent survey for 1999-2000 considered part-and full-time undergraduate students who attended postsecondary institutions during that year. Of these students, in 1999-2000 approximately

On a state level, NPSAS shows that through 1999-2000 students who attended Nebraska institutions accumulated average student debt totaling " $15,414 for those who completed any program. " $18,731 for those who earned a Bachelor's degree.

Although Nebraska's average in this year was higher than the national average, the following chart shows that the difference was not major. 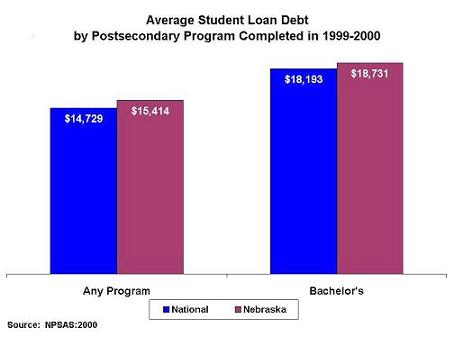 WNCC TO BE FEATURED ON DISCOVERY CHANNEL

The college was selected for a five-seven minute segment to air this fall on the theme providing education in rural America. Pat Summerall Productions selected WNCC to be featured in the show along with three other education institutions. Besides WNCC, the half-hour spot will feature Paine College in South Carolina, Wyo Tech in Laramie and Guilford County schools in North Carolina.

The selection process for a community college began with 15 institutions which was then narrowed to five. WNCC was selected after interviews with Dr. Diana Doyle, vice president of Educational and Student Services; Dr. John Harms, president; and Bob Waddell, director of College Relations.

"They selected WNCC because we meet the criteria they required: established institution, stability, longevity and creativity in leadership, ability to thrive in rural America, and a variety of programs/activities in meeting the needs of the communities," Doyle said.

The camera shoot date will be Friday, May 9. A production crew will be on campus all day. The college will provide some video at the Alliance and Sidney Centers. The short segment will highlight academics, unique partnerships, student achievement and our rural locale.

Additionally, Doyle said, the college will be featured on the Discovery Channel's education website and on the Forbes magazine website.

"This is an incredible opportunity for our college," Doyle concluded.

For more information call Rhonda Brower or Bob Waddell at 635-6080.

Communications met at the beginning of May to discuss our goals for the upcoming year. We decided to continue the Leadership Book Review which began with the Special Projects committee last year. We will be reviewing 2 books and featuring them in upcoming issues of NeASFAA News.

One of our larger projects for the year will be to update the NeASFAA website and the NeASFAA News. We are going to be evaluating the current organization and information of these online communication tools. We plan to develop something that is professional, easy to navigate and print, and allows flexibility for growth. You may be asked to complete a survey soon to get your feedback and ideas on this project.

Please contact any of the following committee members with any communication needs.

As you all know, the new year is just around the corner, July 1st to be exact. And as always, the Membership Committee will be sending out notices for membership dues. The dues cover the membership year of July 1 to June 30, but dues are not due until September 1. It had been discussed previously that the deadline for the annual dues comes at a bad time for some members due to the fact school is just beginning or had just begun. A motion was made, and passed by the Board of Directors to change the deadline for annual dues from September 31, to July 31. Now letters will go out earlier, so that some folks will have a chance to submit them BEFORE their classes actually begin. We hope that is helpful, but understand that this time of year it is difficult to find any amount of time to squeeze in another item to work on.

In addition to the usual duty of collecting dues, the Membership Committee is planning to continue with several of the positive processes already established, such as the Newcomer's Welcome, and the NeASFAA Navigator. And yes, you guessed it, we are planning to tackle the update of the pictorial directory, so start thinking of that 'picture perfect' out fit to wear. Details on all of these activities, and maybe a couple new ones, will follow.

Happy new school year to all!

NeASFAA wrapped up another successful year following the April 9 - 11 conference in Grand Island. Agenda topics, accommodations, and even the weather made this conference one for the books.

The conference kicked off with about 90 NeASFAA attendees who heard a Reauthorization update from Jack Taylor, University of Kansas Medical Center, and Dr. Tom Melecki, NSLP. The day ended with fine foods, then it went "to the birds"-crane watching! Along with a crash course about cranes, our patience was tested as we waited for them to fly in for the evening-a sight worth the wait. Thanks to Terri Graham for coordinating this special event.

The conference concluded with breakout sessions and passing of the gavel from Vicki Kucera to Deana Unger, 2003-2004 President-elect. Preparation for Adult Living Services (PALS) was awarded the annual fundraiser. PALS received $1,154 from NeASFAA, a $1,000 matching gift from EducationQuest Foundation, and donated materials like school supplies, back packs, towels, etc. Thanks to everyone's support of this year's philanthropy effort.

Well now that the 2003-04 budget has been presented it is time to look forward to the new year. Thank you to C. J. Thoma for all her hard work on putting the budget figures together. The committee will be meeting in the next month or two to conduct the annual association audit. We will review the audit guide and prepare a report for the board in the upcoming months. The mileage policy survey was presented to the board of directors and was discussed at great length during each of the sector meetings at the spring conference.

I look forward to working with my wonderful committee of Doug Watson, Sherry Douglas, Tammy Stevenson, Deana Unger (ex-officio), Kyle Rose (ex-officio) and Shirley Huttenmaier (ex-officio). Please give any of us a call if you have any questions or concerns.

Deana has her bachelor's degree in Psychology from Nebraska Wesleyan University. While pursuing her degree she began working at Nebhelp and met her husband Greg to whom she has been married to for eleven years and has three children-Nicholas, Natalia and Noah. She became the Director of the EPC Center in August of 1991 then began working in the financial aid office at the University Nebraska Lincoln in March of 1993 as Verification Specialist. Deana's current position as Associate Director of Client Services began in September of 1996.Her favorite things to do besides following the Atlanta Braves are spending time with her family, walking and loving to shop. She enjoys working with students, parents and coworkers. Her most rewarding professional experience is being a Neophyte instructor for summer institute.

The following stories are the latest in an ever changing Nebraska world of financial aid.

Shelley Pollock has taken the job of Sales Representative for the Rocky Mountain and Southwest Regions for TERI Education Loans. She replaces Amy Wilson. Glad you could join us Shelley!

Weather:  Blue and Overcast (Boy, are we blue about departures):
In news from TERI Education Loans Amy Wilson has been promoted to Director of Sales for the Midwest and won't be covering Nebraska any longer. Best wishes Amy!

Another departure is Kris Weigelt, Assistant Director of Financial Aid at Dana. Kris has taken a position with Cargill. Her new job title is "Grain Accounting Specialist". So when it comes to accounting for your grain, you know who to call! Best of luck Kris, you will be missed!

Sports:  NeASFAA Teams are growing
UNMC increases their team numbers when Daniel Henry Miller was born to Angie Miller. Daniel was born 2/7/03 at 11:21 pm and was 7 lbs 2 oz, 19 1/2 inches long. Mom is now back to work and would like to let everyone know that he is "Growing like a weed and looks like Dad!"

The Midland FA team has a new member!! Michelle Reeson, her husband and son welcomed Zachary Lloyd into the world Monday June 9th! He weighed 7 lbs 12ozs, and was 22 inches in length. Congrats to the Reeson family!!

Tom Melecki, of NSLP was spotted on a national level mixing it up with NASFAA folks. Tom was recently appointed to the NASFAA Research Committee for the upcoming year! What doesn't Tom do?

Also among the famous, Linda Adams of UNMC was awarded for her role in "The Many Jobs I Do". Seriously, Linda was awarded Woman of the Year by the American Business Woman's Association. What a compliment to Linda and the many jobs she does!

Diploma in hand, your graduating students are ready to face the world--and student loan repayment. They can survive the repayment jungle by finding out how much income they'll need to repay their student loans and estimating their future monthly payments using these handy, online resources.

Mapping Your Future's Debt/Salary Wizard calculates how much income they need to make student loan payments, and the Student Loan Calculator helps them estimate their future monthly payments.

To help graduates negotiate future salaries and benefits and assess how much they are worth in the workplace, the Salary Wizard provides average salaries for specific occupations and locations based on national salary surveys.

Graduates who need more information to help them repay their student loans can find a Repayment Calculator, Pros and Cons of Consolidation, and a Consolidation Calculator in the Repayment Assistance section of NSLP's website.

These are just a few online resources you can give graduating students to help them survive the student loan repayment jungle. the American Business Woman's Association. What a compliment to Linda and the many jobs she does!